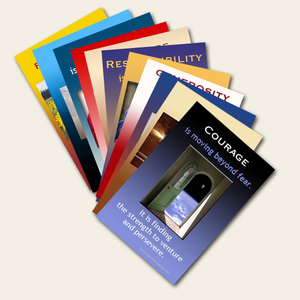 What about character training? Is it something schools should teach? How do you teach patriotism, honesty, loyalty, hard work, etc.? Whose values are you teaching?

When they set about the delicate business of instituting a republican government for the first democracy in modern times, the American Founders assumed one thing: democracy in American would succeed only if her citizens were both "knowledgeable" and "virtuous". If youth is our future, educators must join parents in stressing the virtues.

The Core Virtues Program Lake Country Academy uses is a practical, non-sectarian approach to moral development (Authored by Mary Beth Klee, see www.corevirtues.net for more information). It promotes basic moral, civic, and intellectual virtues such as: respect, responsibility, diligence, honesty, generosity, perseverance, courage, faithfulness, compassion, openness to inquiry, reason, and humility in the face of facts. These are virtues that we can all agree upon.

The program promotes the virtues by staff and students modeling the behavior, through classic literature that reinforces positive behaviors, and by focusing on historical and current people who have made or are making a difference. History has many examples of strong men and women who, when confronted with difficulty, temptation, danger, and vice, win though perhaps at great personal cost and sacrifice. Their heroism will inspire young minds when they ask, "Who will I be like?"

A random selection of literature could include: King Midas and the Golden Touch (self-control); Paul Revere's Ride (courage); "Give Me Liberty or Give Me Death" speech by Patrick Henry (civic courage); Song of Hiawatha (gratitude); and Dicken's, A Christmas Carol (generosity).

Lake Country Academy will join you in your effort to inspire your children to be good people!